Variable data printing is revolutionizing direct-mail marketing, and allows you to make “snail mail” that’s as personalized and engaging as email… but with much higher response rates than email.  It’s a best-of-both-worlds solution that demonstrates direct mail is still far from dead.

That said, there are also significant issues to consider when deploying variable data printing, from both a cost standpoint as well as its impact on the recipient.  Variable data can also be misused, or used poorly, so good planning is essential.

These are the five most important factors to consider when utilizing printing services with variable data.

There’s a significant cost difference between full-color and black-only printing, and this can in turn make a big difference to the mailer’s reception.  Color printing allows a much wider range of customizations, including custom design work and other advanced visual elements.

As an example:  If you have detailed racial demographics on your customers, you could easily produce three versions of the same mailer utilizing different pictures according to the recipient: perhaps a Caucasian version and a Hispanic version.  The effect would be enhanced significantly with color printing.

Is it worth the increased cost?  Look to your customer research and see how they’ve responded to mailers in the past.

There are now a variety of online tools which can be used to enhance your marketing database and learn more about the lives and preferences of your target audience.  As an easy example:  If you know someone’s address, you can quickly and easily look up a number of statistics about their neighborhood such as property values and average incomes.

However, such data should be used only for big-picture and targeting decisions, and NOT incorporated directly into the materials themselves.

Just because the average income in an area is $80K/yr, that doesn’t mean any given individual recipient necessarily makes that much.  Putting guesses into your variable data mailers will, at best, merely alienate recipients.  At worst, it could actively insult them or turn them against your company.

Do not print any “customized” information that you don’t have a solid reason to believe is true for that particular recipient.  Few things will ruin the effectiveness of a mailer faster than false targeting.

Multiple sets of eyeballs should be on everything in your variable data printing process.  From double-checking that all surveys are entered correctly, to triple-checking all spelling and grammar, there really is no such thing as “too much checking” when it comes to direct mail.

Another great aspect to variable data mailers is that each one can be customized with tracking information specific to that customer.  If Joe Smith receives a mailer with a QR Code attached and he scans it with his cell phone, you’ll know Joe Smith himself (or at least someone in his house) received and responded to the mailer.

In some cases of more advanced interactions, such as barcodes linking to Facebook, you truly can pin it down to one specific person.  Then, as you collect this data, you’ll be able to continually refine your methods and processes to boost the individual response rates.

Direct Mail Is Better Than Ever

Far from killing off snail mail, modern electronic printing and tracking processes only make it better.  Your variable data printed mailers can have all the engagement of an email, while inspiring better engagement and response rates! How to Stand Out in the Mailbox with Direct Mail 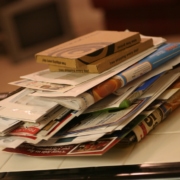 Winter is coming: Get a jump on your holiday direct marketing
0 replies